Croquet is one of those games that seem complicated when you first hear about them but are pretty simple to learn and play. There’s a good chance you’ve seen croquet being played before but might not know how to play with these wooden mallets and colorful balls. If you’ve been thinking about trying croquet or have played it before and want to get better, you’re in the right place. Today, we’ll go over the game’s basics, from how to play croquet to scoring and strategy. Plus, we’ll give you tips on improving your skills and using the best croquet kit.

So, grab your mallet and get ready for some fun!

Croquet has been around for centuries, and its popularity has only grown in recent years because of its relaxed and colorful nature. The game’s goal is to hit balls through hoops using a mallet, with the winner being the first player to reach all hoops.

You can play this game on any court size, but the standard size is 30 yards by 60 yards. Likewise, you can play croquet as a set of two or four players. If four players are in the game, they are divided into two teams of two.

Croquet is a pretty addictive game that people of all ages can enjoy. Once you have the best croquet set and know how to play croquet, you’ll admire how exciting it gets when everyone is in the competitive spirit.

What Does the Best Croquet Kit Include?

The best croquet kit includes all the necessary equipment required to play the game. The most important piece of croquet gear is the mallet, which you’ll use to hit the ball through the wickets. Croquet balls are typically made of wood or plastic and are slightly smaller and more colorful than golf balls. The wickets in the best croquet set are usually thin metal rods arranged in a specific pattern, and the stake is a small metal post placed at the end of the playing field. The last piece of equipment in the best croquet kit is the peg, which you’ll use to mark the progress of each player around the course. Croquet is typically played on a lawn or other open area, and the kits vary in size and complexity depending on the number of players and the size of the playing field. 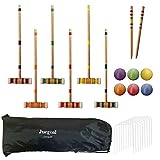 Here are some basic rules to help you understand how to play croquet:

Now that you know the basics, grab your best croquet set, and get playing because this game is exciting! 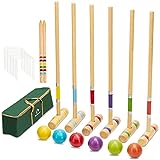 How to Prepare a Course for Playing Croquet?

If you’re learning croquet, here are a few things you’ll need to do to prepare the course:

Once everything is in place, you’re ready to start playing!

How to Play Croquet

Now that we know what the best croquet set includes, here is a step-by-step guide to playing the game:

The player with the red ball will then take their turn and try to do the same. The first player to get their ball through all of the wickets and back to the start is the winner.

Is Croquet Easy to Learn?

Croquet is a game that dates back to the simple times when people used to gather in the evening and play any ball game they liked. This game is played with two teams of two players each, and the goal is to hit a small ball through a series of hoops using a mallet. Likewise, you can add some variations to the basic rules of croquet and make it more thrilling. Although the rules may seem complex at first, croquet is quite easy to learn and doesn’t require much physical exertion either (which makes it a suitable option for all age groups).

The key is to take your time, master one shot at a time, and use the best croquet set that includes everything required for this game. If your kit doesn’t have good-quality mallets or wickets, you’ll have a hard time setting up the course. That’s why buy the best croquet set and read its user instructions to understand how to play croquet like a pro. For instance, you can start by practicing your swings and learning how to control the direction of your ball. Once you have the basics down, you can move on to more advanced shots, such as hitting the ball through multiple hoops in one turn and scoring more rounds.

Is Croquet an Expensive Sport?

Croquet is often seen as a sport for the wealthy because it resembles golf, but that doesn’t have to be the case. Yes, if you want to join a country club and play competitive croquet rounds, it can be quite expensive and hard to get into. But if you want to enjoy a game with family on a lazy Sunday, you don’t need to spend much money on croquet.

All you really need is the best croquet set and an outdoor space where you can set up a course to play. The cost of a croquet set will vary depending on the quality and brand, but you can easily find the best croquet set for under $50. And as for the playing area, any flat surface will do – your backyard, a local park, even the beach where you don’t get interrupted. So don’t let the cost of equipment deter you from trying because croquet can be great fun.

Hopefully, by now, you have understood the basics of croquet and are ready to give it a try. Croquet is not only a physically challenging sport, but it also requires precision, strategy, and the best croquet kit. By playing croquet, you can improve your hand-eye coordination and focusing skills. In addition, croquet is a great way to get some fresh air along with meeting new people and breaking a sweat. Whether you are looking for a challenging game or a leisurely activity, croquet will be the perfect pastime for you. So, what are you waiting for? Grab a mallet and start swinging!