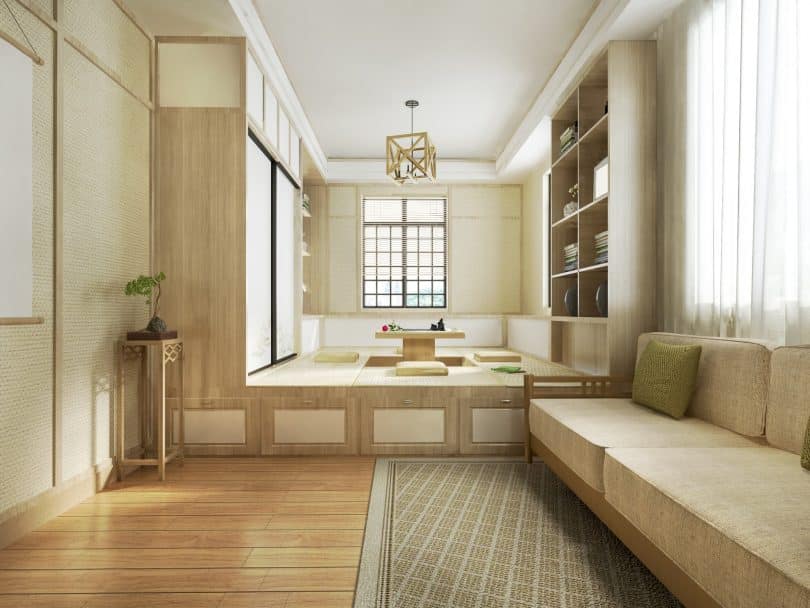 Japanese interior design follows many of the same principles that define Japanese culture. It focuses on minimalism, practicality, and philosophy to improve wellbeing.

The Concept of Japanese Interior Design

Japanese interior design has changed little in the last thousand years. It favors minimalism and function over anything else. While we might think of these as modern ideas, the Japanese have built their entire culture around them.

The practice was initially heavily influenced by Chinese culture back in the 8th century. But, like other aspects of Japanese culture, it developed its own unique spin.

If you’ve ever designed or decorated a room, you might find some parts of Japanese interior design to be quite jarring. But, with a bit of planning, it’s quite easy to bring the key features into any design project.

Japanese interior design relies on 11 key concepts. These define almost every decision made during the design and decorating process and many will be instantly recognizable to anyone who’s visited the country.

So, let’s look at the key features of Japanese interior design.

Where possible, it’s necessary to use natural materials rather than manmade ones. Natural materials have a soul and listening to them allows you to understand more about the world around you.

Of course, natural materials are almost always more beautiful and allow you to feel more connected to the world around you. This is where the ideas of philosophy and spirituality come in.

A room with plenty of natural light, sparse use of materials, and properly used décor will make you feel calmer and lighter than a heavier, darker room.

In Japanese culture, white is a fragile and delicate color. According to designer Kenya Hara, it is both all colors and no colors at the same time.

White is a popular choice for wall color in Japanese interior design. It’s the perfect canvas against which to design a room and helps the occupier to feel more energized.

Japanese interior design favors simplicity and elegance but doesn’t overlook detail. Minimalism relies on detail, although this might sound contradictory.

Something can be incredibly detailed and still seem simple. In fact, this is the sign of a true master of design. For example, hiding joins in furniture or working with wood’s natural texture to create a simple and elegant space.

While we might think of void as nothing, Japanese interior design sees it as potential or emptiness. This isn’t a negative. In fact, it’s preferred in this branch of minimalism.

Void exists between the items that make up a room and allows us to better perceive what’s there. This is another philosophical aspect of interior design.

When done properly, void allows you to imagine and create a space in your mind that complements what’s actually there.

This is one thing that all types of interior design have in common. Illumination is vital for making a space come alive, and the Japanese appreciate this more than most.

Japanese homes are often designed around the relationship between natural light and natural materials. Everything looks better in natural light, and it’s treated as much a part of interior design as the construction materials.

It’s no secret that Japan is a compact country. This has led to modular design becoming a popular concept in architecture.

Tiny homes have risen in popularity and this means spaces often serve more than one function. Each space inside a home should transform into something else that provides function and value to the occupier.

This is a key concept of minimalism and Japanese interior design. Almost everything that doesn’t serve a function counts as clutter, but so do practical things.

It’s important to only include things that serve a purpose every day.

You’ve probably heard of Marie Kondo. Her philosophy, which seems radical to many Westerners, is pretty standard in Japan.

Japanese houses use fusuma, which are sliding panels. They serve as both walls and doors, helping a space to feel more open.

While not featured in every home, the principle applies to open-plan living. It ties in with rooms being modular and multifunctional, which has existed in Japanese culture for centuries through fusuma.

A genkan is the traditional entrance hall for a Japanese home. It’s where the host meets their guests and where the outside is left behind. Specifically, it’s where you take off your shoes.

This isn’t unique to Japanese culture, but the country has put its own spin on the concept. Specifically, you never sit in a genkan, it’s only for waiting. The philosophy is to separate being outside and being inside through a clear transitional space.

Ideally, Japanese interior design features a space for meditation or relaxing. It’s a mindful space that often brings in nature. A Zen space is one of the few rooms in a Japanese home where you’d find different colors, namely green or brown.

This is possibly one of the most important ideas to carry across to Western interior design. Having somewhere in your home specifically for relaxing or practicing mindfulness is revolutionary.

It should be somewhere calming where you can step away from work to focus on yourself. It’s fair to say this is something many of us are missing.

Japanese interior design is a fresh approach to arranging the home. It favors a calming approach to living, specifically through its use of materials and minimalism.

While you might not be rushing out to redesign your home as a Japanese oasis, it’s possible to apply many of these principles to your existing spaces.

Jacob Powell is a freelance writer based in Wales. He enjoys writing on a number of topics, particularly hobbies, fashion, and home improvement. His working life is fuelled by buckets of coffee and long days spent at the computer.